The true nature of money of legal tender, which we use for our economy has no backing material, they are based on trust, fiat currencies.

Money is created by the expansion of private credit. The problem of using money-debt is that there is no way to grow and, since it does not create the money to the interest on the debts, inevitably tends to inflate or collapse. Classical economic cycles of capitalism not already governed success or failure: it has created a new category of the "too big to fail", big banks and insurance companies that we cannot let them to bankrupt and liquidate, but "we must rescue them". We are at that point where the pace of bankruptcies outperforms the creation of wealth. The balance of the central banks has grown several multiples from the banking crisis of 2008 as in the next crisis because there will be no safety net: or debt is unpaid or currency is destroyed by loss of confidence.

Gold standard: the prices of goods and the price of gold.

While a gold standard is working, increases in productivity are expanded to the whole society causing the fall in prices of goods, but not the consumption level.

However, the fiat system of fractional-reserve works as a parasite, which through inflation expropriates savings and causes the rise of the prices of goods, although productivity increases. Hence the loss of purchasing power for the past 40 years.

The bubble of all bubbles: the fiat money. 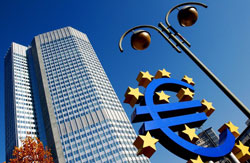 Throughout the twentieth century until 1971, gold served as monetary standard. This is, all the currencies established a fixed change with respect to gold. The amount of physical gold stored as a reserve in the coffers of the Central Bank was a restriction on the amount of money that the Central Bank could create.

Since 1971, the international monetary system no longer has such a reference, with which you can create infinite amount of foreign currency without gold backing. Inflation has eroded the value of the currency since then, and the debt is unpayable without a dramatic increase in productivity. The only track that is left to the central planners is to create new money to repay the debts they carry out, in a hyperinflationary spiral that will end by destroying the value of all currencies trust.

The final reference currency will be gold. The savings of those who do not have gold will fade.

Sign in
We use cookies. If you continue to use this site we will assume that you are happy with it.
Got it
×